ROC De Leijgraaf is a school for vocational education in the Netherlands with campuses in Cuijk, Oss, Uden, Veghel and Boxmeer. De Leijgraaf has about 650 staff members and about 6,500 students in the domains Technology & Society, Economy & Business, Hospitality & Tourism and the Career Center. www.leijgraaf.nl

Helicon MBO is a school voor both vocational education and pre-vocational education in the Netherlands with campuses in Boxtel, Den Bosch, Eindhoven, Geldermalsen, Helmond, Nijmegen, Tilburg and Velp. Helicon has about 750 staff members and about 6,500 students in the domains Food, Environment, Agriculture and Horticulture, Green Living Environment, Flowers, Animals, Cities and People. www.helicon.nl

The Teacher Design Team
The teacher design team (TDT) consisted of 3 teachers from ROC De Leijgraaf and 2 teachers of Helicon MBO, supported by a media coach and a researcher/member of the Tablio project team. The team of teachers had different backgrounds and existing knowledge with regards to VR.

Phase 1: Design challenge
The TDT started by discussing about a joint design challenge for the team. There was agreement on the requirement that there is a need for more realistic forms of education. One way to do that is by visiting organizations/companies, but that is difficult to organize on a large scale. They expected that VR can help here by providing alternatives to the actual visits. So they formulated three hypothesis to test:

Hypothesis: The TDT sees VR as a way to provide students with safe environment to experience situations from their (future) working environment that would otherwise not have been possible.
The teachers also see VR as a required ict-skill for students, meaning that they think it’s important that students by graduation time at least have some hands-on experience using it. But students should also be able to form ideas and a vision with regards of the further development of VR.
A final shared question the teachers have it what it means to use / create a VR-tour  as a didactical activity.

Hypothesis: The TDT beliefs that it is possible to provide teachers and students with the needed support materials to enable them to use VR (with some support of the iXperium) within their lessons and study.

Hypothesis: The TDT beliefs that the resulting learning materials can be used to provide teachers with means to provide differentiation and inclusion with mobile devices for their students.

Level up the same levelThe members of the TDT had a different level of knowledge and experience with regards to VR and 360-degrees video/images. Some had already created VR based on 360-degrees video/images before, while other members were completely new to the topic. The members shared examples of previous products that they worked with or on and discussed them.
The media coach helped the members that were new to VR in trying out 360-degrees cameras and headsets.  In this phase the TDT also setup a Facebook page for the TDT showcasing a GDPR friendly picture of the whole group active in VR.

The members of the TDT studied current (mostly online) literature about VR.
A previous TDT had recommended to use smartphones and (relatively) cheap headsets as a means for students to experience the VR tours. The main reason for that choice was that the experience was “good enough” for its purpose while it added the bonus of lowering the barrier for students to watch the VR-tours using their own or abundantly available hardware from the iXperium.

The TDT also experimented, with support of the media coach, with tools and online environments that can be used to develop VR-tours. They shared experiences, questions, challenges and literature found and read via their own blog (in Dutch).
They created a questionnaire for teachers and students asking them about previous experience with VR . 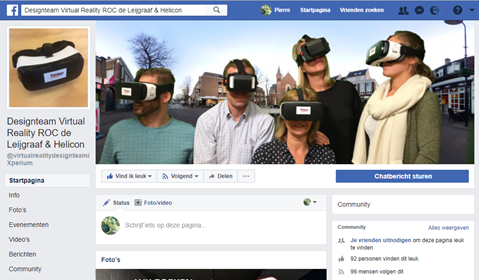 During this phase the TDT decided on the design requirements for the products they are developing. The requirements are based on a brainstorm with the team, advise from the literature, feedback from the presentations / sessions with students and teachers.

The TDT created three groups of experiments. A diary/logbook (in Dutch) has been kept of the activities within each of the experiments. The experiments are briefly described below.

To support students and staff during the experiments, the TDT created a number of instructions (in Dutch) related to:

The instructions were tested during the experiments and where updated and improved based on the feedback that the TDT received while using them.

Two teachers worked, together with a group of students, on an external assignment for the city of Oss in the Netherlands (where De Leijgraaf is located). They build a historical walking tour where a VR tour with historic images is added to the real live walking tour. They created a VR tour where historic pictures are overlaid over the current situation. 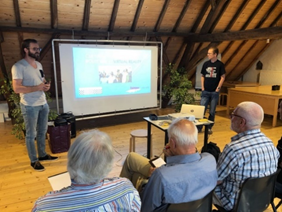 Screenshots of the result:

One teacher worked on an assignment as part of the social care vocational training: a 360-degrees tour of a number of social care organizations.
An example of a tour created using pictures and video can be viewed online:
http://vr.ixposs.nl/web/Hoeve/
The tour contains some text in Dutch but uses icons for the navigation.

Experiment 3 Helicon-tour, virtual tour through Helicon in Eindhoven and Tilburg.

The pictures below show screenshots of the completed products.

The TDT designed and tested a number of lesson designs using 360-degrees pictures and video. They created instructions for the tools needed by students and teachers. The goal was to make the instructions so clear that students and teachers could even use them unassisted.
Where possible they shared their products online, for pictures and videos involving students this was a challenge.
The TDT presented in public about their preliminary results both during an external conference (the CvI conference for VAT schools in Leeuwarden) and during internal knowledge sharing meetings. It is not very common for teachers to present about work in progress. But for the process of working in a TDT it is considered very important.
The TDT maintained a public Facebook page where they shared progress, pictures and news.
After completion of the work of the TDT, the results are being integrated in the regular trainings provided by the academies of both De Leijgraaf and Helicon MBO.

•    It was remarkable how quickly and easy the “new” members of the TDT were able to get up to speed about VR. Having colleagues around that can show first-hand examples and having a media coach that can help getting the hang of the technology greatly increases the speed with which teachers can learn to become comfortable with the technology.
•    The questionnaire from phase 1 showed that not just the teachers in the TDT saw the applications for the technology.
•    During the TDT, the members were  introduced to the concept of sharing early and sharing often. While teachers usually are reluctant to share their experiences while only just started with the development, the TDT was (successfully) challenged to already share during the process. The sessions provided feedback leading to (small) changes in the formulated design challenge and ideas for a new VR-platform (teachvr) that the TDT could use (and decided to use).
•    Although the teachers were very clear on their requirements in phase 3, they did not commit to any pedagogy related requirements.
•    Despite the efforts of the TDT to make the instructions as “simple” as possible, often other teachers and students required some additional support in using them.
•    Students that did the learning activities as a voluntary choice were more intrinsically motivated for the assignments

Looking back on the three hypothesis

The materials developed by the TDT needed to be fine-tuned and wasn’t always enough on its own, but it did succeed in providing students and teachers (at least for the most part) with the help they needed to get started using VR. The use of VR / 360-degrees images and videos by students does provide an additional option for them to express themselves. Not everyone will like it, but it is a good option for product-differentiation. It also provides a safe environment to experience situations from their (future) working environment.