TABLIO Project Istanbul team has prepared a Teacher Design Team consisting of 5 foreign language teachers, 2 pre-service teachers from Istanbul University - Cerrahpaşa, ELT department and 3 teacher trainers in Avrupa Koleji Innovation School. The teachers were all from the foreign languages department who taught from 1st to 4th grade. The TDT continued for 8 weeks on Fridays at 3.30 pm, the last day of school on every two week intervals. During the meetings first the pedagogical approach of TABLIO project was presented by the teacher trainers, then the concept map and the concept of differentiation was introduced. Next sessions included the school presentation and the context and needs of the schools as well as the curriculums that the school followed. Then the curriculums of the school for all grades was transformed for differentiation with tablets and many apps were matched to the learning outcomes. The school purchased 20 tablets in the meantime for the class use with the advice from the teacher trainers of TABLIO Project. Then the teachers were given time to design and differentiate their lessons. These lessons were evaluated with the help of the teacher trainers. However, as the school was sold to another investment group the teachers never had the chance to apply their lessons and report back on them. The teachers as well were scattered around other schools unfortunately. They all reported that they were eager to continue the work but all of them were in different schools and it was difficult to collect them back again in one place. 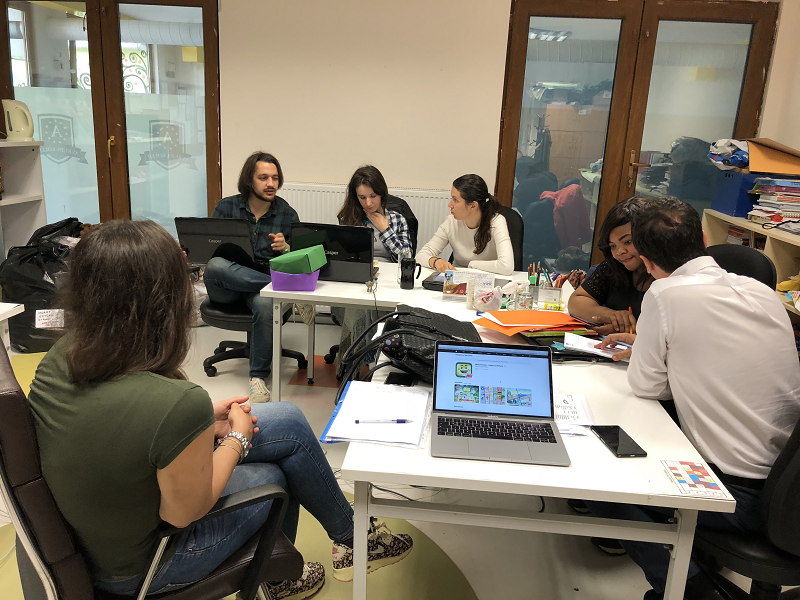 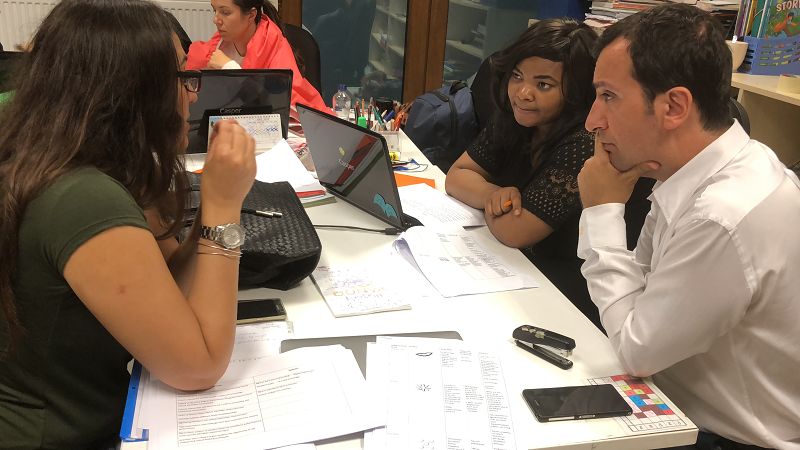 TABLIO Project Istanbul team prepared a Teacher Design Team consisting of 1 foreign language teacher, 2 pre-service teachers from Istanbul University - Cerrahpaşa, ELT department and 2 teacher trainers for Ümraniye Nurettin Topçu Primary School. The 2 teachers from this school were invited to the Faculty of Education at Istanbul University – Cerrahpaşa. The teachers were invited for 4 weeks and the previous TDT design was used. During the meetings first the pedagogical approach of TABLIO project was presented by the teacher trainers, then the concept map and the concept of differentiation was introduced. Next sessions included the school presentation and the context and needs of the schools as well as the centralized curriculum that the school followed. Then the curriculum of the school for 4th grade was transformed for differentiation with tablets and many apps were matched to the learning outcomes. The teachers preferred to create their own lesson plan that was in parallel with the centralized curriculum. Both teachers came up with their lesson plans and good practices in the end of the 1 month they had for application.

The school Ümraniye Nurettin Topçu Primary School was established in 2005 - 2006 Academic Year. In 2005, it was constructed as 1 manager room, 3 deputy director rooms, 24 classrooms, 3 science laboratories, 1 visual arts classroom, 1 computer technology class and 1 multi-purpose hall. However, the school has been transformed into primary school in the academic year of 2012-2013 and there are currently 1 manager room, 2 assistant manager rooms, 42 classrooms (private education and classroom for Syrian students), 2 guidance rooms and 1 multi-purpose hall. The school has 3 floors excluding basement and ground floor. The school was named as Dudullu Primary School and changed to Nurettin Topçu Primary School since December 2015. The school is a regular state school (full-time education from 8.50-14.20).

The lesson was planned for the English class for 38 students from the class 4, section G. The “Countries and Nationalities” unit in the primary school English curriculum was the subject of the application and was planned for differentiation in process for warm up activity and pre-speaking phase.

I planned activities with the tablets provided by the students. Since I couldn't reach as many tablets as the number of students, I designed the activities as group work or as the activities of the teacher with his own tablet to differentiate a certain stage of the lesson.

I have applied the school's wireless network password to tablets by collecting the tablets in advance to make the internet connection to the tablets. This took a lot of time and I couldn't put the school's internet password because of some insufficient technical equipment to some tablets or my lack of technical knowledge.

I have done my own tablet activity warm up. Activity in time, because the tablet's own internet was completed without problems, but the lad pre-speaking event in the activity I planned for the tablet to be connected to the school's internet site was unable to open the desired website. Later I learned that this problem is not due to the lack of a strong internet connection since my school is not part of the FATIH project.

I tried to solve the internet problem by sharing the internet of my own tablet, but this time I could not connect more than 5 tablets. I spent a lot of time with these reasons. I changed my plan within the possibility of pulling 3 rows in front of the board and put the tablets connected to the internet in each order and tried to solve the students by taking groups. This took a lot of time because of the crowded class and I had to end the lesson far behind what I was planning. 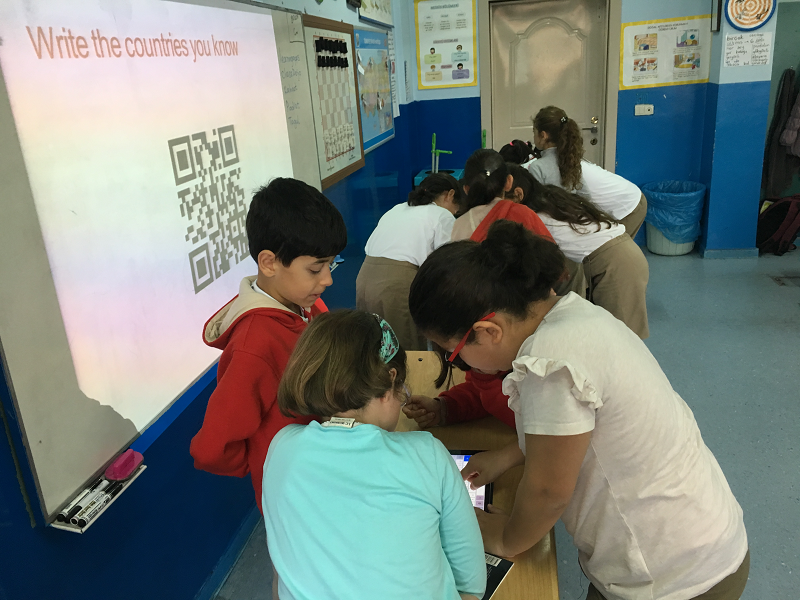 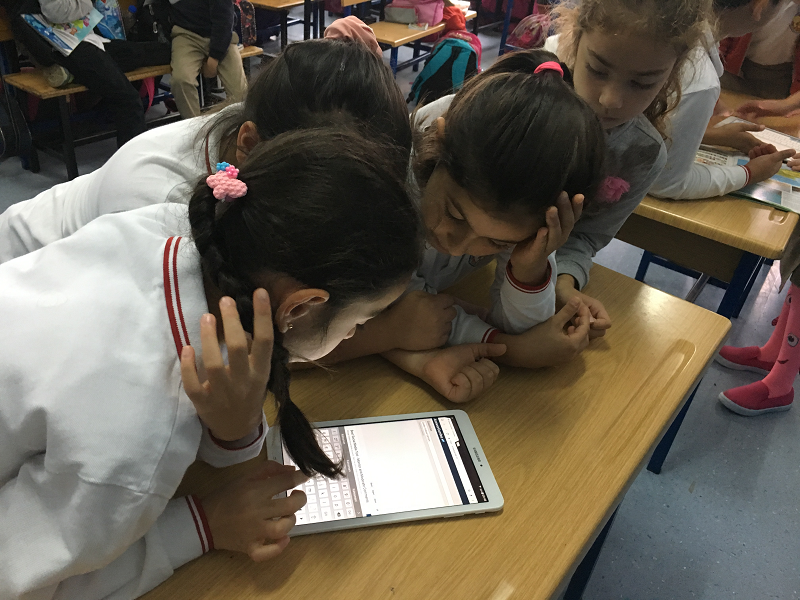 The teacher used “Quiver” for the “Warm up” and “Inigma” (Qr Code Reader) and “AnswerGarden” fort he pre-speaking activity. The teacher has a computer and a projector in her class. 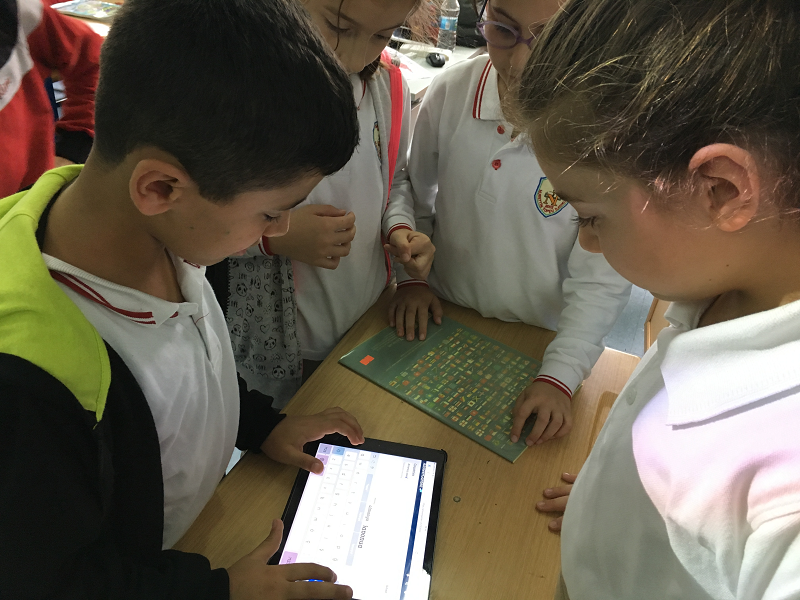 The English teacher used a group work as she didn’t have enough tablets in her class. The students used the apps on their tablets to warm up for the class with flags and country names. They got awareness on the colours of the flags and what country they belong to. The students drew the flags and had Quiver transform them as Augmented reality.

The teacher observed the participation of the students and reported that all her students wanted to participate in the activities and that the motivation of her students increased initially.