This text describes the use of a Teacher Design Team (TDT) to explore the application of mobile devices in assisting teaching and learning at North West Regional College (NWRC), in Derry, Northern Ireland. The College has five main campuses, spread across one city and two towns. There are a large number of out-centres, often community centres, spread out across the north west of Northern Ireland, where part-time courses are delivered, during the day and in evenings.

NWRC is a College of Further and Higher Education. This means that it provides courses for:

In recent years the College’s enrolment numbers have averaged 3400 full-time and 14000 part-time students. This includes groups of students who attend from local secondary schools, typically aged between fourteen and sixteen, who undertake what are essentially introductions to vocational areas that the schools do not offer.

The College’s students come from a very wide range of educational backgrounds and pursue a wide range of subjects at a range of levels. Many courses are vocational, aiming at specific employment routes. Other courses aim to lead to further study, with a lot of the students going straight from the College to university.

Where a student enters a course without having GCSE passes in English and Mathematics, the government requires the College to enrol them on Essential Skills Literacy and Numeracy respectively. The students are required to gain Passes at level 2 in these, which is equivalent to GCSE Grace Cs (pass). This can be quite a challenge, given that they were not able to achieve this level after five years at secondary school.

The College has been supporting learning through technology since approximately 2001. This has meant that over the years all full-time and part-time courses have course materials and some exercise made available to learners from an online platform (LMS).

Over the past five years NWRC has had an increasing focus on use of mobile devices. Initially this involved making Wi-Fi available outside classes, for students to access the LMS or Web. Over the past three years use of mobiles has extended to use during classroom sessions, to:

Access to mobile devices initially came from the College’s provision of a number of suites of iPads. There was a fear that encouraging students to use their own smartphones in class opened the potential of misuse, with possible unknown taking of photographs and subsequent potential for bullying.

Over the past one or two years many staff are more comfortable to have students use their own smartphones in class. This has happened due to a realisation that planned and managed use can greatly add to the vibrancy of classroom sessions and that protocols established and agreed with students allows expectation of disciplined and effective use of mobile technologies as a normal element of classroom activity.

Elements of the Case Study

The study and solution was based on a group of students, many of whom were required to complete a numeracy/Mathematics unit, with a significant overlap of the group also required to complete a literacy/English unit. The target was “how might we improve achievement of learning outcomes in performance in GH’s Literacy (English) and Numeracy (Mathematics) classes by increasing engagement of all learners”.

There are many challenges with teaching this class, the most significant being:

GH manages his class by:

In the Derry area there is a declining demographic in the numbers of young people from which the College would typically draw students. As schools and the College are funded based on numbers of individual students, this has meant over recent years local schools have been working very hard at keeping their pupils after compulsory attendance age. A consequence of this is that in some course areas the College has an increasing challenge in attracting students.

The TDT consisted of: 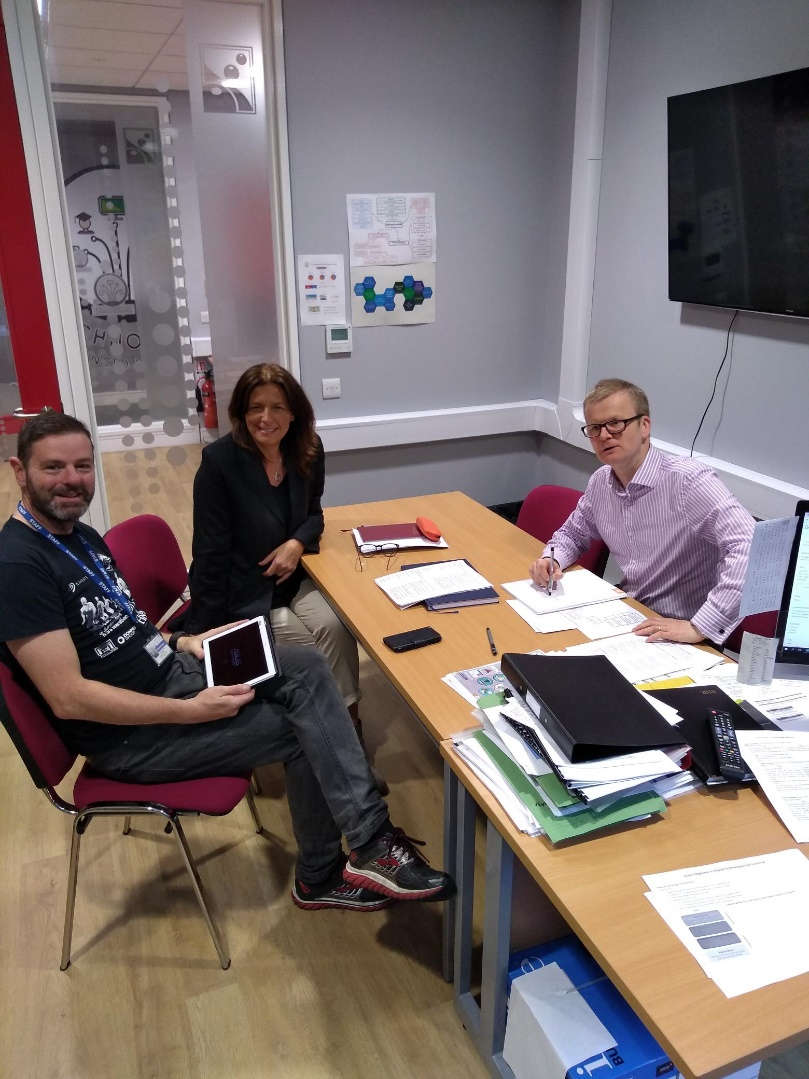 MP was required, sometime after the TDT had been working, to take over the role of learning technologist as SC became unavailable over a prolonged period. MP had a background in learning technology, and had significant knowledge of the project, so was able to undertake the project activities.

As the project progressed there were inputs from a group of new teachers, with whom EOS and MP worked on a regular basis. This was a group of staff who were undertaking a College course for newly appointed teachers.

Planning for the solution to the issues relevant to this case study took consideration of both pedagogical and technical design principles. In particular, consideration was given to:

The TDT meetings at the outset focussed on identifying the issues for the target group of students. GH explained in detail who the members of the class were, their learning backgrounds and some of the challenges he experienced in working with them.

At the next meeting MP and SC did some demonstrations of tools that they believed should be considered. These aimed to:

The TDT decided that there would be very valuable opportunities to do some work with the literacy and numeracy elements. The two groups are not completely the same, but there most of the students involved were in the same.

A total of two class sessions were designed to cover literacy classes, focussing on the production of formal letters and basics of punctuation and capitalisation. Following the meetings to investigate the nature of issues in delivering literacy classes to the group of students, the tools and resources identified below were part of the solution.

Before getting into the specific formal lessons, on two occasions the students were given the tablets in class to: 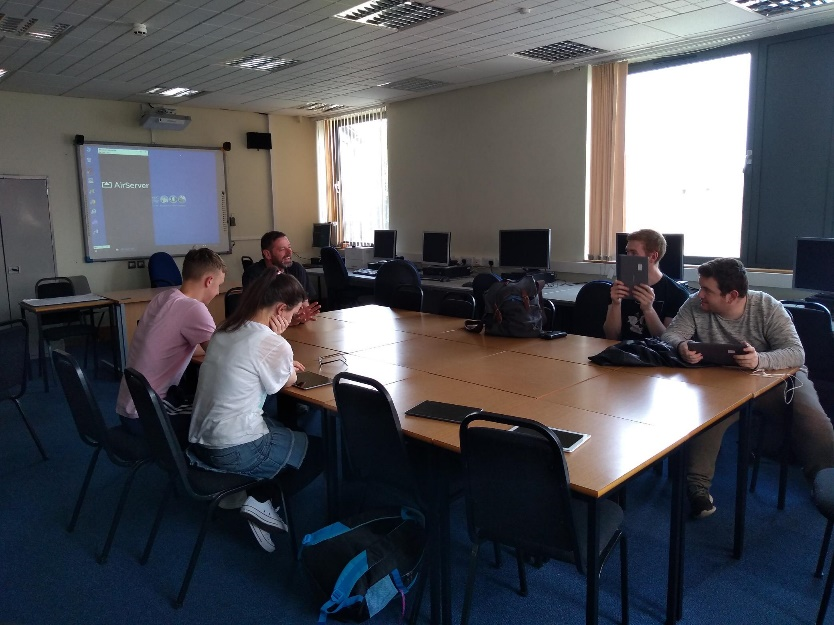 These preparations were done so that when the time came to do the actual lessons, achievement of the learning objectives wouldn’t be hindered on inability to use the technical resources, so the focus was completely on the curriculum issues.

The group decided to use Nearpod as the delivery platform as it:

Nearpod means that students have the lesson’s digital contents to be delivered to a device (tablet) they are in possession of. This has a number of advantages, in particular that the attention of the student can be held as, by careful design of activities, the teacher can intersperse subject matter with activities. For example, in dealing with commas, G was able to show examples of where they should be used, and some incorrect use. He then followed up with activities where the students had example sentences and to indicate where commas should be placed.

Using the Gold account, which we did for a period, meant that the content could be both student and teacher driven. In the case of the latter, the teacher manages progress of the lesson. The value of the former is that students can decide when to move through the learning materials and activities, allowing them to move at their own pace.

G’s lessons were designed where he had some materials that involved him leading, followed by other resources where the student moved through materials at their own pace. During these elements he moved through the class checking if people had any issues with which they wanted help. This also allowed him to gauge where he needed to address elements of the content that was covered.

Nearpod also allowed the teacher to add, in an ad hoc manner, real-time created questions or activities. An example would be that there when there was some confusion about an example given, G added, in real-time, another similar example, just to see if the students were able to handle an unexpected issue or query about part of the teaching material as it was being delivered, the teacher can straight away send an additional question/activity to the students, via Nearpod and appearing on the tablets, requiring students to consider the issue and provide an answer. The answer could be given orally, or if desired sent back electronically.

We also found that Nearpod allows discretion when responses are made by students, you (the teacher) can chose to show the identity of responders, or keep that undisclosed.

The learning materials added to Nearpod consisted of: 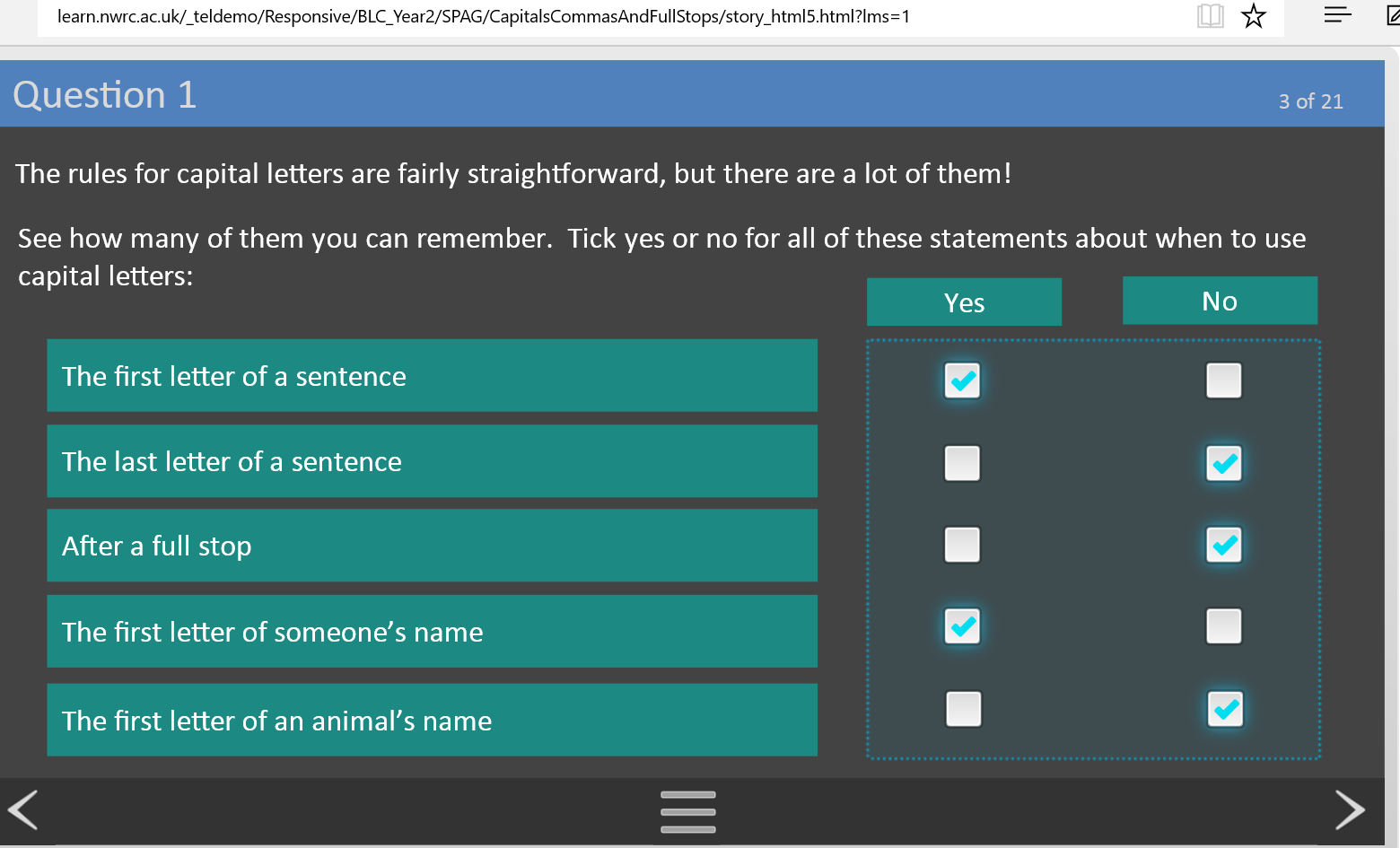 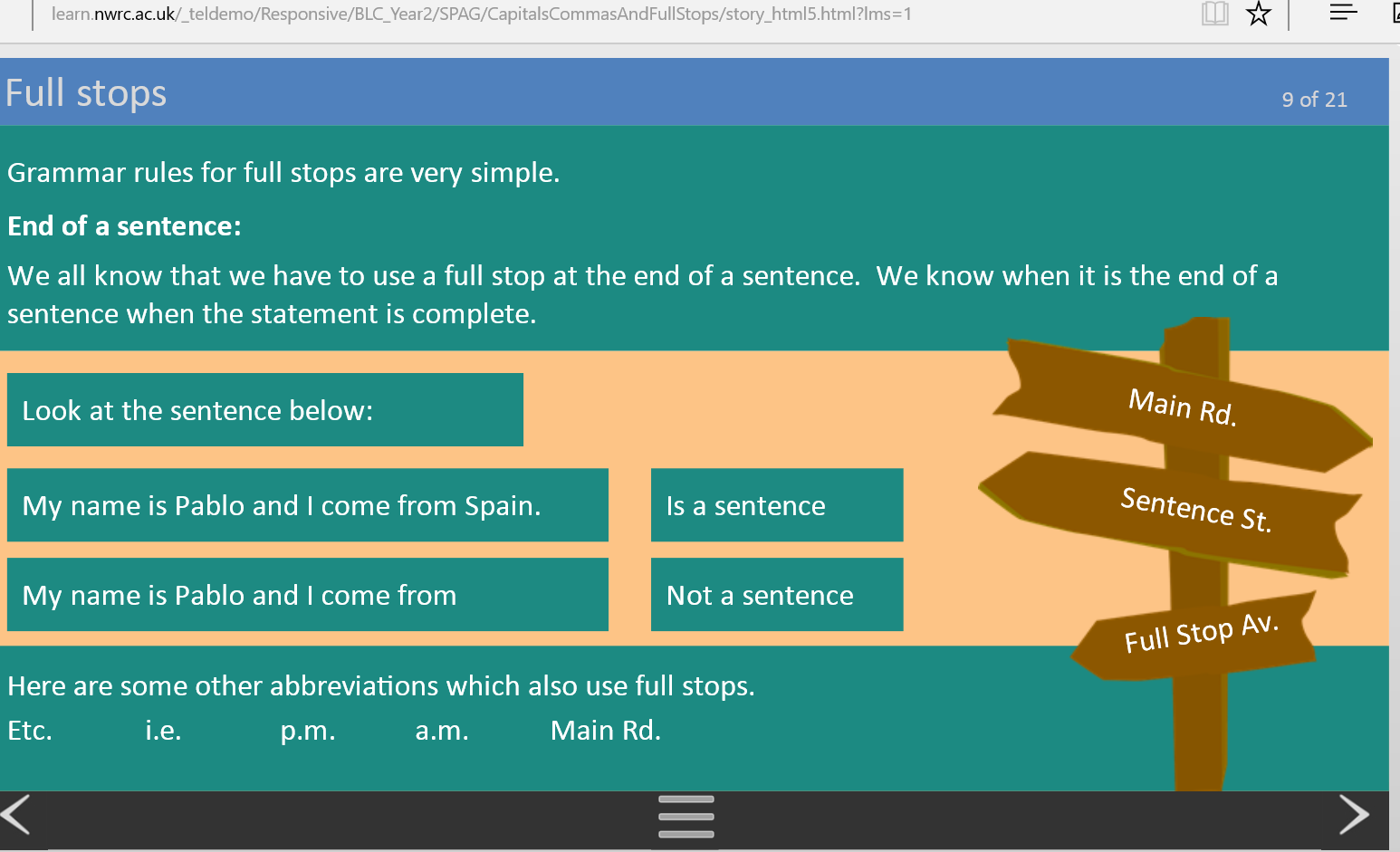 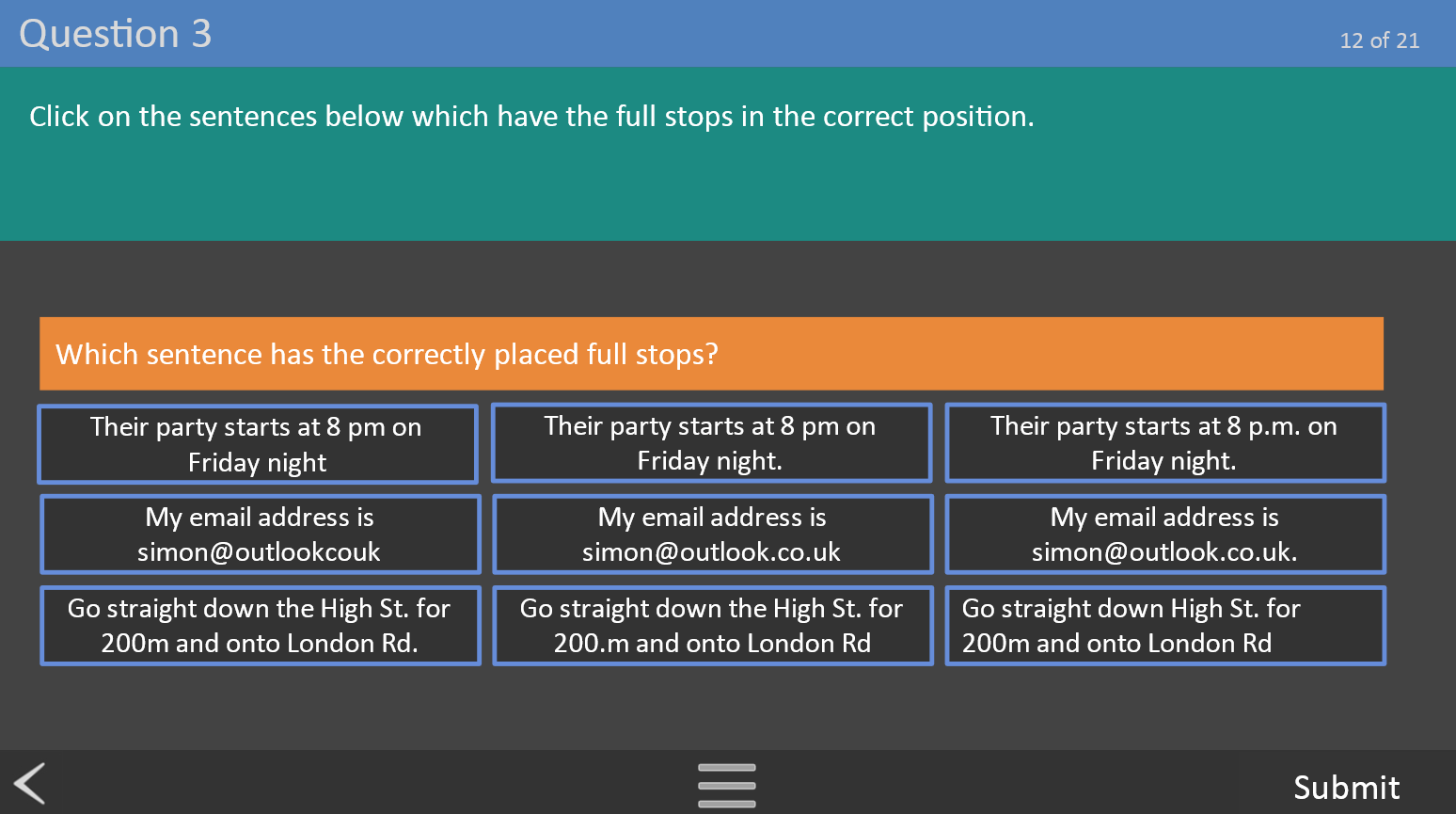 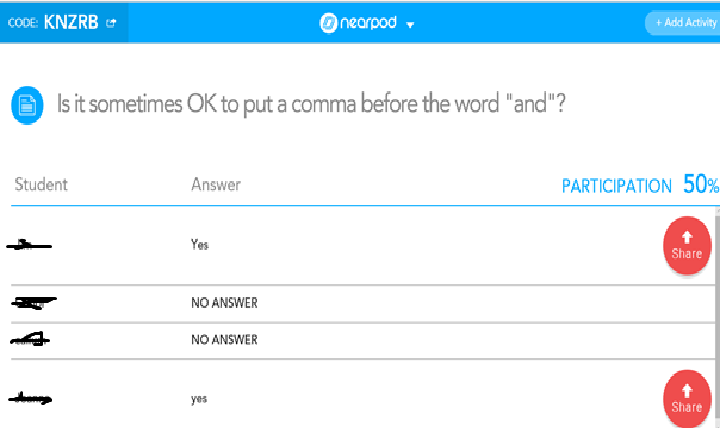 The second literacy example was a class that dealt with writing letters. The resources used here were delivered through Nearpod, and consisted of: 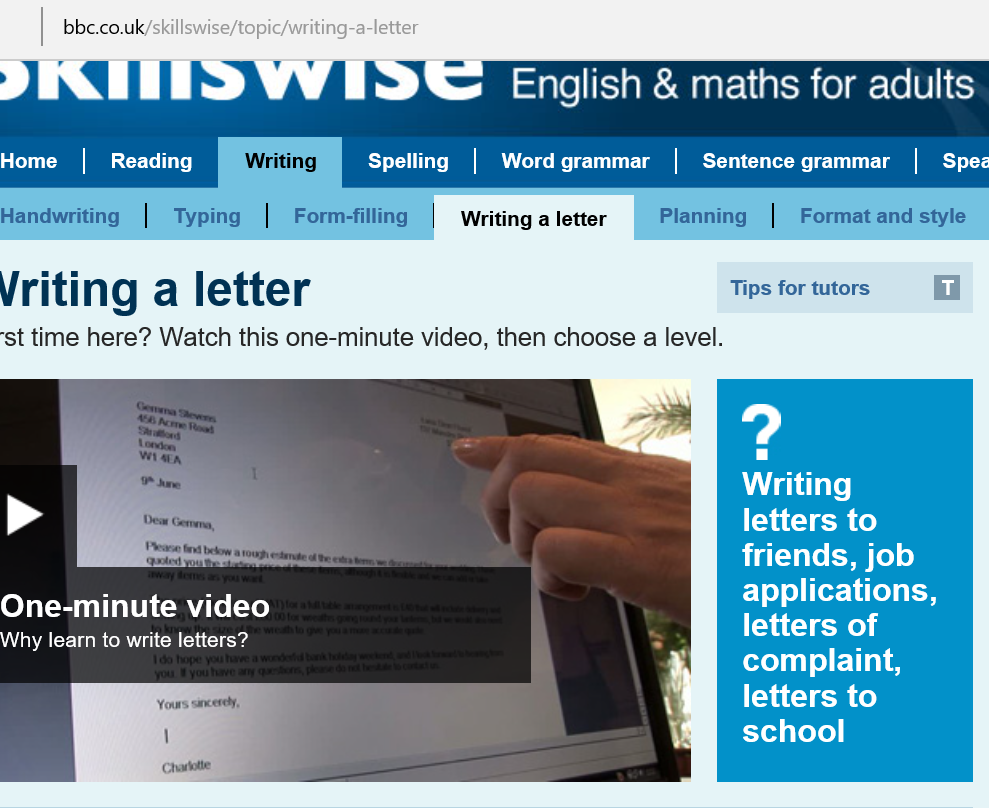 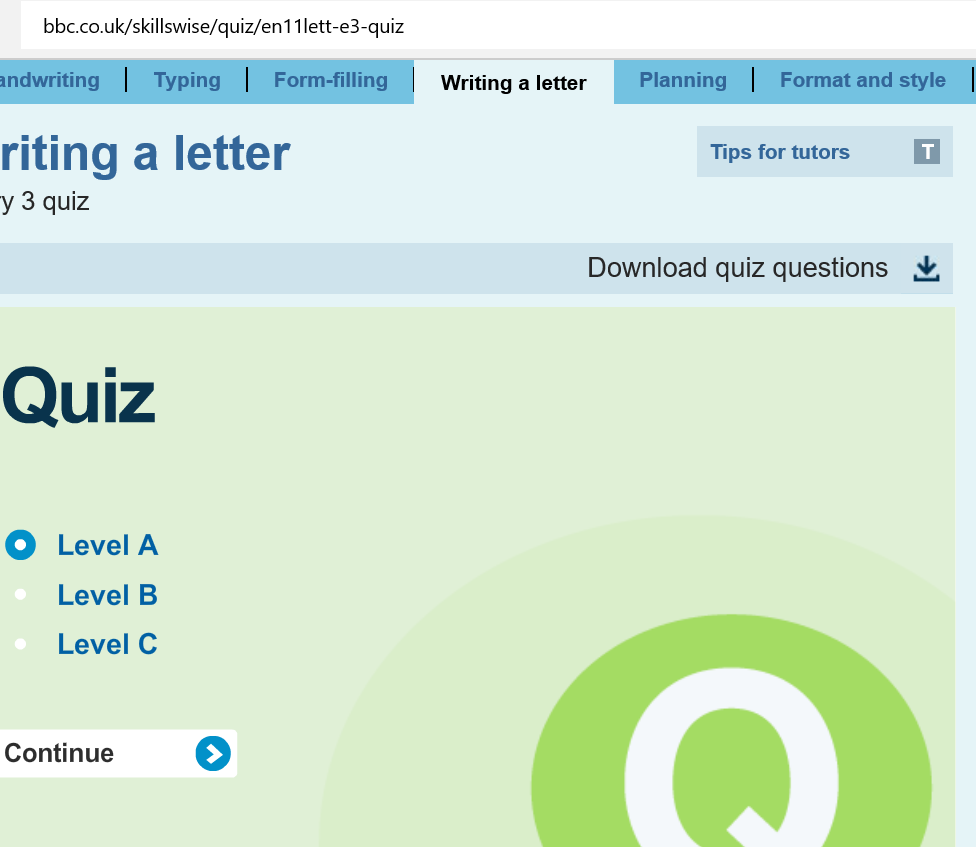 The students finished up by having to write a letter on their tablet, based on an instruction provided by GH, and were given the option to display it to the class. This was done using AirServer, which provides casting, also known as device mirroring, where a devices screen content is replicated on a PC, which, as it is connected to the classroom’s data projector, meant that the student’s tablet screen was shown to the class. Two students showed their work and explained the rationale for the letter structure and content that they had used.

The numeracy example was an introduction to percentages. Similar to the Literacy examples this consisted of using Nearpod to create a lesson with digital resources, including: 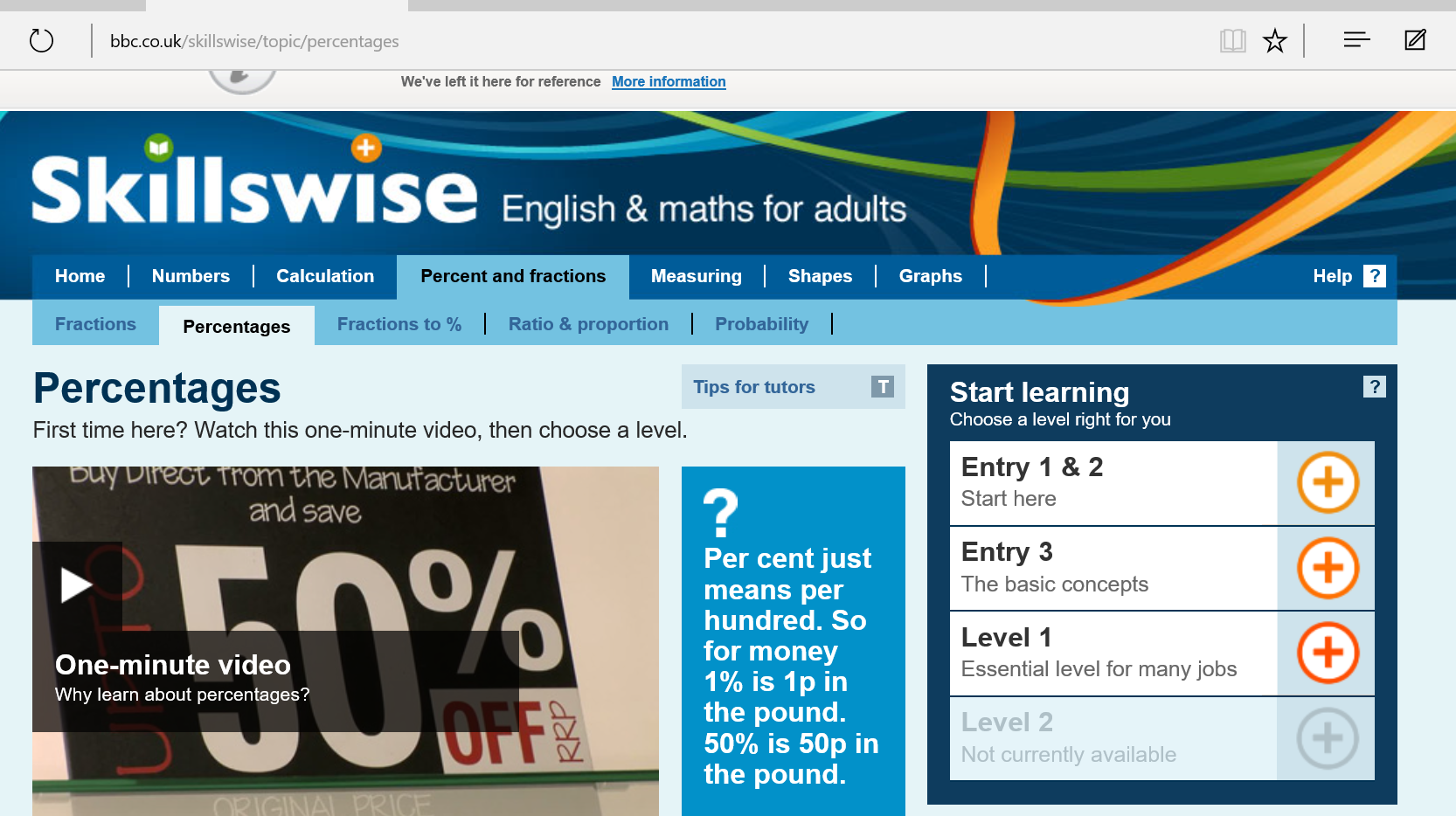 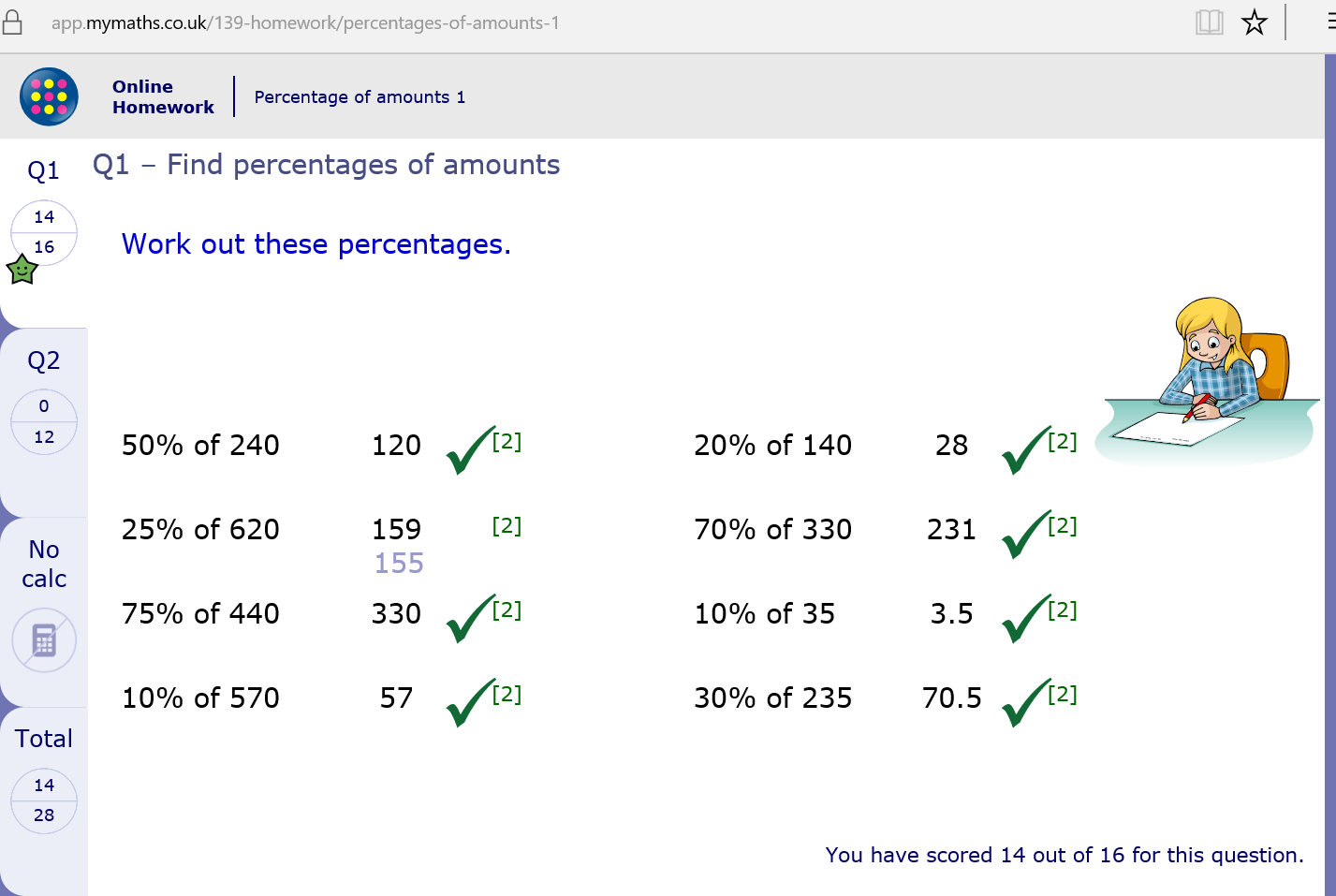 The online homework is a way of allocating some pre-set practice exercises to a defined group of student users. The teacher allocated 2 separate homeworks exercises on percentages to the group, to be done in class. The instruction was to all complete the first exercise/homework, and if finished continued to the second one, with a hyperlink to it.

This meant that the able students had enough work to keep them busy. One of the strengths of MyMaths is that with the homeworks, there is the facility to set individualised work to suit student’s strength. Results of work completed are available by question and group of questions. (Mymaths has been around as an online mathematics teaching and learning resource PC-based, using Flash as one of the underlying technologies. In recent years much of the content has been re-engineered so that it no longer needs Flash, so is usable on tablet devices.)

The students were given 20 minutes to complete the exercise(s). At the end of that time 60% of the student had finished homework 1, 27% hadn’t completed, and 18% had got half way through homework 2.

GH went over the homework 1 questions in class, asking the students to volunteer to explain the answers, or cast their solution to the group.

Having the tablets available in class allowed each student to: 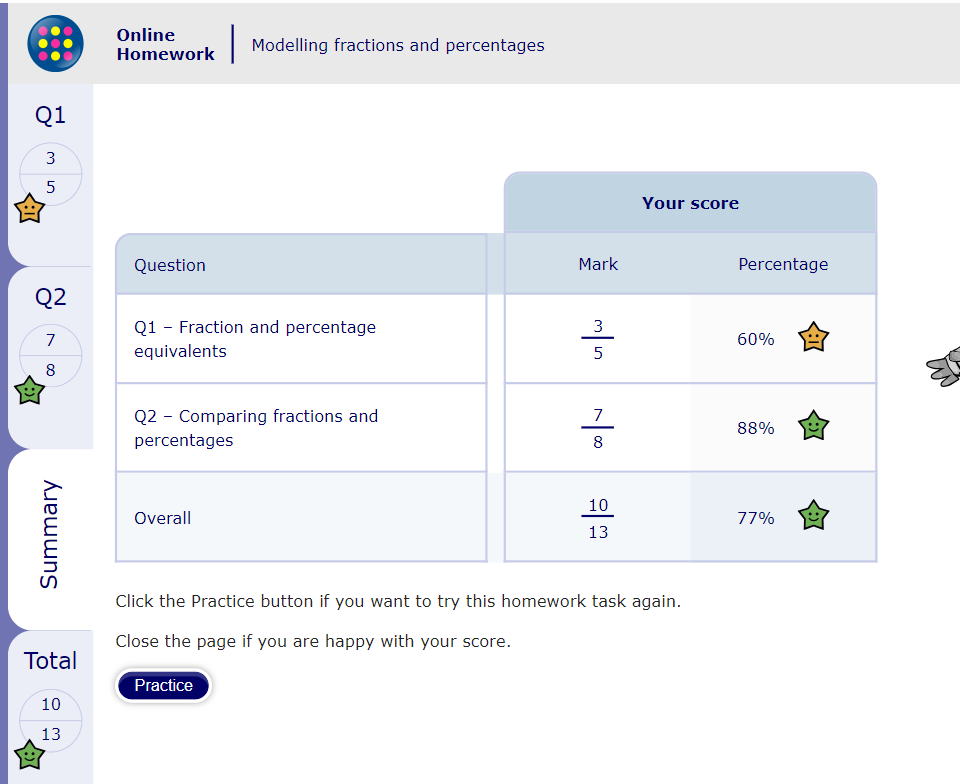